The 2016 Sign has been installed, and preparations are underway for the 2016 Sign of the Times celebration, scheduled for New Year’s Eve. This year, members of our community will be meeting in the Northeastern Reaches of the GamingEDUs Professional Play Server (in Survival) at Gumby’s newest build, The Red Castle.  You can join us by logging on and using /warp 2016Sign to get straight to the party. Things will be well underway by 8 PM Eastern Time.

Jack and Emma and CosmicDragon and Joop have all been lending a hand with getting things ready. Jack’s Snack Shack is back again, with the menu already posted. Emily has opened Emily’s Art Gallery right next door. We have a wonderful Viewing Area set up again this year, and Cosmic has started work laying out the wiring for the fireworks. Our Selfie-Station is in place in front of the sign, and we will be taking a group photo just before 8 pm, so be sure to be online a bit early!

New arrivals to The Red Castle may also be interested in undertaking a self-guided tour of the structure, which features a prototype sorting facility in the basement and an XP/ZombieDrop Farm just across the front yard. The recently-installed Pyramid Chickenatorium is housed beneath a nearby Desert Temple a short walk away.

SPECIAL NOTE:  In addition to the Sign of the Times party at 8 pm, we are also hosting the first annual Great Wall of Gumby Marathon Run Event, commencing at 7 PM Eastern Time, one hour before the New Year’s event. To join the run, meet at the Circle Garden at Gumby’s HorsieField Castle. You can get their directly by joining us at /warp GumbyMarathon — arrive shortly before 7 pm so that you have time to get fed and hydrated before we head out. We’ll be running the complete perimeter of the Gumbian Empire atop The Great Wall. We’ll conclude by travelling back by boats from the far end of the wall via the ocean portion as demarked by The Sea Towers. Starting the Year Off Right!! 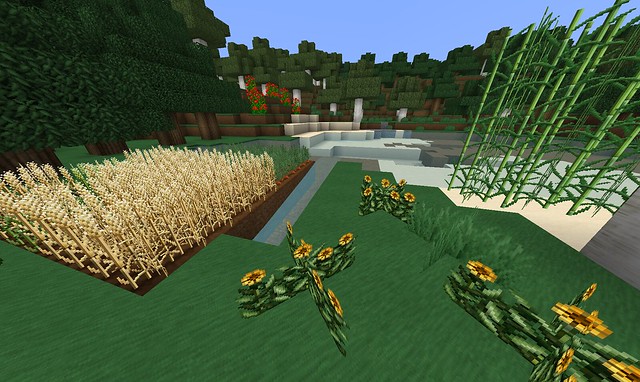 Collaboration for Survival and Creativity